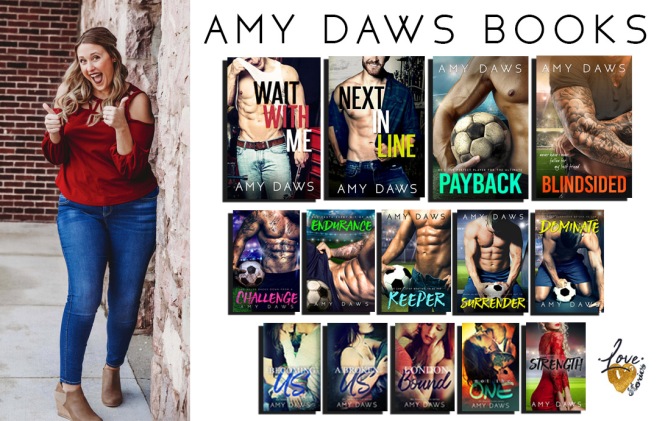 Chronological Reading Order for the London Lovers & Harris Brothers Crossover Series:
1. Becoming Us
2. A Broken Us
3. London Bound
4. Not The One
5. Strength (formerly That One Moment & A Perfect Moment)

Amy Daws Suggested Reading Order (based on favoritism):
If you like a series binge:
1. Challenge

Amy Daws Suggested Read if you want just one book:
1. Wait With Me

Here is the back story reading order of my books for those that want to know more!
Once upon a time, I wrote a book called A Broken Us…it was about an American girl named Finley who went to go live with her bestie, Leslie that lived in London at the time. This is where she met an intriguing British lad named Liam Darby.
I clicked PUBLISH: 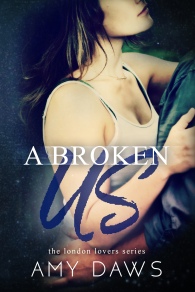 I thought A Broken Us would be a standalone, but the feedback on my secondary characters was so awesome, I knew I had to continue…but first, I felt pulled to tell Finley’s backstory more. Consequently…we went back in time and Finley’s college prequel in America was born..Becoming Us: 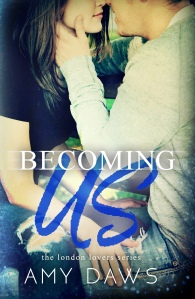 Then…her London bestie, Leslie, was just screaming for a story! So we went forward in time, back to London, and picked up where A Broken Us left of with Theo Clarke & Leslie Lincoln’s story, London Bound: 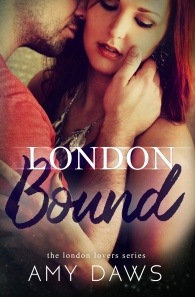 Thus, the London Lovers Series was born and I changed the reading order to start with the college prequel. Though you don’t have to read the prequel to enjoy A Broken Us. If London is your thing, you can dive right into A Broken Us…then onto London Bound. 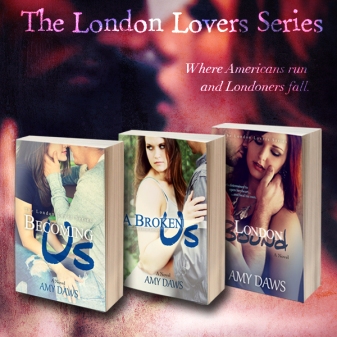 After London Bound released, I had introduced my readers to the hero, Theo Clarke and his family. Namely, his brother Hayden. My readers demanded to know more of the shattered Hayden Clarke…and the quick cameo of tension between Reyna Miracle and Liam Darby at a hospital scene in London Bound intrigued me.
Enter…Not The One: 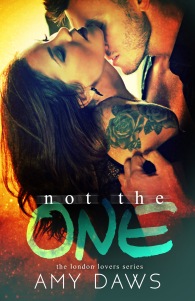 I’m sure by now you’re like, okay, so this is Book 4…what’s confusing?
But here’s the deal. In A Broken Us and London Bound…you’re following a very tight-knit circle of friends that are all interweaved into each other’s everyday lives. They even live together in the same house. In Not The One, you are following characters on the outside of that group. So I labeled it a spin-off standalone. Because that’s what it is. London Lovers characters do make appearances in NTO, but I don’t include any spoilers to the previous books in the event new to me readers want to check out their stories.
To me, this was the perfect way to introduce myself to new readers and pull them into the magic of London and all of these characters I have created.
But then my readers all wanted a HEA for Hayden…and Hayden begged along with them (in my head). So I wrote That One Moment: 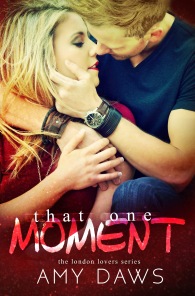 And I thought…oh wow, Not The One and That One Moment fit together so well, let’s make them their own spin-off series called Lost in London. It’s a nice easy duet for readers to enjoy. However, they could just as easily be labeled London Lovers book 4 & 5. 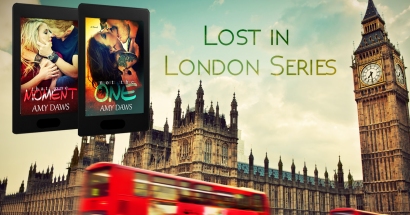 But then, as if you’re not already exhausted, I also wrote a fun short story for Hayden and Vi that could be called a bonus epilogue. (that’s currently free on all platforms) 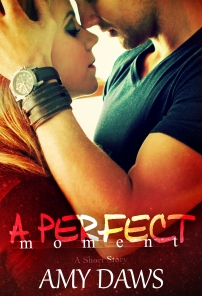 And to add one more shrimp on the barbie…in That One Moment, I teased a new book called One Wild Night that will center around Frank’s roommate, Julie, and can either be labeled Lost in London #3 or London Lovers #6: 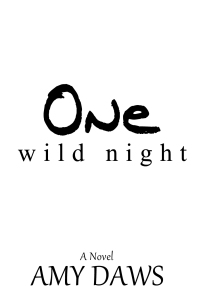 I don’t have a release date for One Wild Night but I do hope to write it someday!
More recently, after the success of my Harris Brothers Series, I decided to recover and re-edit That One Moment because it is the Harris Brothers sister’s story. And so many readers didn’t realize she had a book out so I wanted my branding to have this story connect more on the Harris Brother side than the London Lovers side. 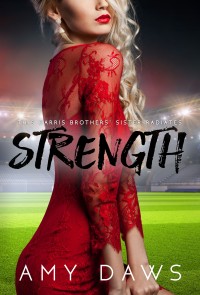 Strength is the combination of That One Moment and A Perfect Moment plus several other bonus scenes and epilogues. It can be read as Book 5 in the London Lovers Series or a Prequel to the Harris Brothers Series! That One Moment & A Perfect Moment are no longer available for purchase.
My Strength spin off sports romance series called the Harris Brothers is now a fully finished series. You meet these 4 football-playing brothers in Strength (formerly That One Moment). The fourth and final brother’s story was such a big undertaking, it inspired two full length books! And there’s lots of fun London Lovers overlap in these brothers books. They are listed from left to right in the preferred reading order but all work as standalones! 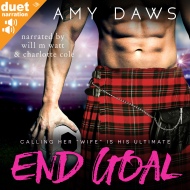 There is also a fun little short story called End Goal available in ebook and audio. It was originally featured in a Cocktales anthology. This is a bonus epilogue for Camden and Indie in Challenge. Chronologically, it splices in between Keeper and Surrender! 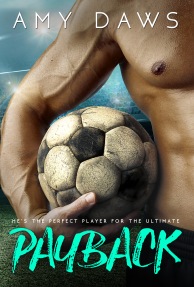 If you read Endurance, there was mention of a South African teammate of Tanner Harris named Roan DeWalt. You also may have read a little short story I published in a Facebook group a while back that featured this mysterious Roan DeWalt going to a wedding with the Harris Brother’s cousin from America named Alice. Well…this is their full length story! Chronologically, this take place after Dominate but I’m considering it a spin off and Book 1 in a footballer series I’ve yet to name. Please note that this can be read as a standalone but features lots of the Harris Family. 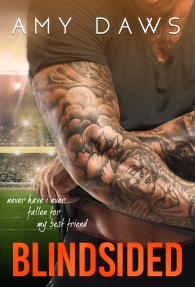 If you read Surrender and Dominate, there was a secondary character named Freya who worked with the main heroine (Sloan) in those books. Well, it’s time for the BFF to get her HEA! Freya meets Mac, the Scottish teammate of Roan from Payback and the rest as they say…is history.

While working on the Gareth’s book, inspiration for a totally detached romantic comedy struck…and Wait With Me was born! So if you’re overwhelmed by series and want to read a fun standalone, this is the book for you! 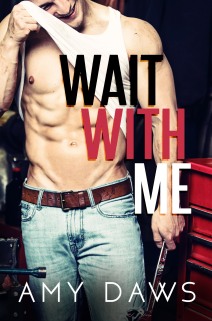 Next In Line is book two in my Wait With Me Series and is about the bearded ginger, Sam, who was the Heroes best friend In Wait With Me. Sam ends up unknowingly kissing his best friend’s little sister, Maggie and shenanigans ensue. 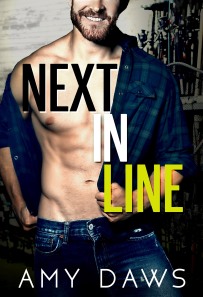 I have plans to continue this series and give HEA’s for Lynsey and Dean…so stay tuned! 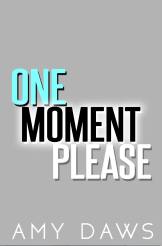 If you take one thing away from this…please know that my books truly can be read in any order. I’ve researched it. I’ve tested it. I’ve discussed it with readers and many of them enjoyed reading them out of order! It’s like a fun puzzle that pieces together in an interesting way. But if you are an order lover, read it this way:
1. Becoming Us
2. A Broken Us
3. London Bound
4. Not The One
5. Strength (formerly That One Moment & A Perfect Moment)

But again, all but Becoming Us and Surrender and Dominate work perfectly as a standalone, so these books do have something for everyone.

Except my Grandma…who is still waiting for me to write Amish Romance. 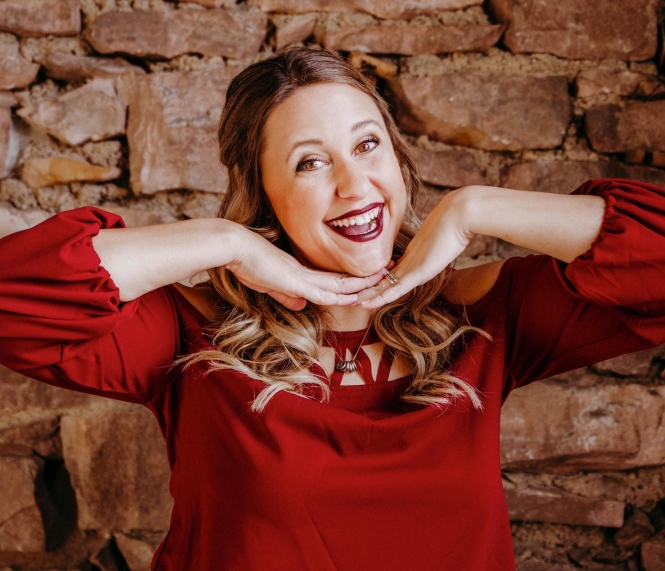 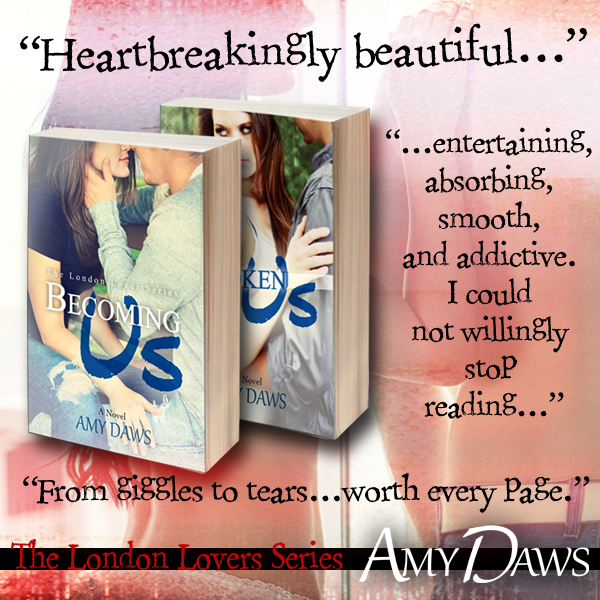